Evolution, I’m not that dense. 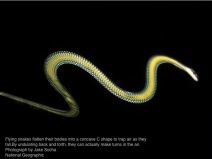 Evolution, I’m not that dense.

Evolution is a leap that I refuse to take;

To explain the origin, I leap I will not make.

To venture guess that creatures took years to develop,

How they did survive the developing time gives my mind a wallop.

How did the emperor moth, said to survive because a spot on his wings

Survive the first million years when lizard hunted the things?

Sure the dot today confuses the lizard so he misses his mark.

But before the development without the defense; that isn’t so smart.

There is a flying snake, which flattens and jumps off a height,

Something that would give a reasonable snake a fright.

His coil makes a foil that allows sailing in the wind.

How many snakes died in attempt to guess, or pretend,

To fly, but failed and crashed with a bang?

Evolution does not allow for the survival of the leaping thang.

I may be ignorant, but I ain’t stupid, not without practical sense.

To believe in evolutions and evaluate the concept, you have to be a might dense.